Myths and legends from the State of Mexico: The Mermaid

.
THE MERMAID OF THE VOLCANO
(Folk story from the State of Mexico)
.
One evening, Don Evaristo was telling Emily and me some new stories from different parts of Mexico, about fabulous animals. Doña Almanda suddenly suggested, “Evaristo, tell our friends the story about the mermaid.”
.
“Which one?” He wondered.
.
“You know. The one we heard when we went to see the ‘Nevado de Toluca’.” She explained. 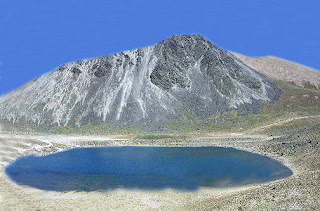 Near Toluca, in the State of Mexico, there is a beautiful volcano called ‘The ‘Nevado de Toluca’, because it usually has snow on top,” he began. “At the top, in the crater, there is a lake. People say that a mermaid now lives there. She was once a quite normal young girl, but one day, she walked up the volcano with her father, who wanted to get some snow. While he was collecting the snow, the girl suddenly decided to go for a swim in the lake. Suddenly, as she was washing her hair, she felt something pulling her down, down, down, deep into the impenetrable black waters of the icy cold lake.
.
Shortly after, her worried father started to look for her, but of course, he could not find his beloved daughter anywhere. He became more and more anxious. Then, all at once, he heard his daughter’s sweet, clear voice, saying: ‘Dearest Daddy, please don’t look for me any more. I am safe, but I am under a spell, and it is my destiny to stay here in the lake, forever. I can never leave the lake again, because my body is now half human and half fish. I am a mermaid. A mermaid who lives at the top of a mountain…’ The man searched and searched until he fainted from exhaustion, not wanting to believe his ears. But he never, ever saw his child again.”
.
“Oh no, that’s very sad!” Emily exclaimed.
.
“Don Evaristo, why did she turn into a mermaid?” I asked.
.
“Hmmm. That’s a good question.” He said. “Nobody can really tell why, but I assume the spirit of the lake decided to take her at once, because she was a beautiful, fresh young girl, with a pure soul, who would bring him great joy…” (Story written by Homero Adame.)
.
“So the father never saw her again. But has anyone else ever seen her?” I asked.
.
“Apparently they have.” He said. “The story became a legend when, quite frequently, people began to swear they had seen a mermaid, at the top of the volcano…” This folk story was found in Homero Adamé's blog.
.
- - - - - -
Would you like to read more Mexican folk stories? Follow this link:
Mexican Folk Literature
.