Mexican indigenous myths and legends of the dead: The Huehues, a legacy of Xantolo

.
THE HUEHUES, A LEGACY OF XANTOLO
.


Legend heard in San Vicente Tancuayalab, SLP
.
There are many versions about the origin of the dances of the Huehues. On the one hand, some suggest that arose through Tének traditions, but others say it dates back to the time when they were conquered by the Aztecc who subjugated the Huasteca. No matter which story is correct, the fact is that those who execute the dances are confident that they predate the arrival of the Aztecs and, therefore, are part of their ancestral culture, although it has undergone syncretism. 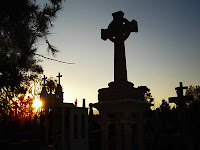 .
In the village of Saint Vincent Tancuayalab people say that the tradition began many years ago. According to legend, one day of celebrating the holidays of All Saints Day everyone was sad as they went to the cemetery to leave offerings to their dead – the appearance of the cemeteries in those days was different from today because there were no crosses or Christian images; besides, the custom was to feel sad and mourn the deceased in their day and everybody paid full attention to such tradition.
.
It is said that on that occasion, a masked spirit appeared out of nowhere and began to dance among the tombs. Since people then were quite superstitious and had many fears, they all ran home and went looking for the Tének priest-shaman in order to tell him about such an appearance. Later on they asked him to do a ritual for that poor soul so it could go away somewhere else and stop frightening the local people. The shaman went to the cemetery, accompanied by the locals, and found that the masked spirit was still merrily dancing among the graves.

.
The priest asked, "Who are you? What do you want here?”
.
The spirit answered in Tének language and so they talked for a while, as people were standing still, following the course of the conversation. Then, the mysterious masked man said a few words in a language that nobody understood, except for the shaman, who did understand the message, and then transmitted to his people. He said: "This being is the very same spirit of Xantolo and wants to teach us how to honor our dead with these dances."
.
People were skeptical and thought that maybe it was just a trickster who was playing a joke. Story written and translated by Homero Adame.
.
Once again, Xantolo said a few words in that unknown language and then many equally masked spirits appeared out of nowhere and started dancing as though the event was a party and not a day to feel and express grief. Since then, word spread among all peoples of the Huasteca, in San Luis Potosi and Veracruz, and people have followed the tradition of organizing Huehues masked dances dancing in the streets and vaults with singular joy to play, instead of having a long moment of tears and bitterness.
.
.To learn more about San Vicente Tancuayalab:
When the Franciscan missionaries founded this town in 1545, they named it San Francisco Cuayalab. In the year 1767, when it was promoted as a town, it changed its name to Villa Fundadores San Vicente. Much later, it received the title of county seat, and with the current name.
.
Its historical names have different sources: Cuayalab or Tancuayalab in Tének language means “place of the baton”, San Francisco, because he was the founder of the order, and San Vicente, as the patron saint of the town, although the festival takes place on October 4, day of Saint Francis of Assisi.

- - - - - -
This story was published in the book: Myths, stories and legends of the state of San Luis Potosi, in 2007, published by the Ministry of Education and the Ministry of Culture. The edition was in charge of Deborah Chenillo Alazraki, then Director of Publications of the SECULT. Beatriz Gaytan Reyes did all the editorial design.

.
You can read more Mexican folk stories and legends on this link:
Myths, legends and traditions of Mexico