A great Mexican tradition: The Day of the Dead

SOME WAYS MANY MEXICANS HONOUR THE DEAD…
.
Legend has it that the European festival of All Souls Day was first devised by Odilon, Abbot of Cluny, France, in the 9th century. By the year 998, All Souls Day was generally established as a festival throughout the Christian world, though the precise rituals varied among different ethnic groups.
.
For example one interesting variation existed for a time in Naples, Italy. On All Souls Day, people traditionally opened up the family crypts, filled them with candles and torches and decorated them with colourful flowers. In many cases, people even washed and dressed the bones of their dead in bright new clothes!
. 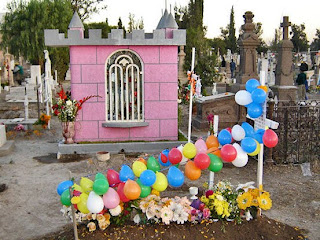 In Mexico, many people celebrate two Days of the Dead, beginning on 1st November by specially remembering those who died as children, and continuing the celebration on 2nd November, in memory of all those who died as adults. According to some researchers, however, there were more feast days for the dead before the Conquest.
.
Bright yellow zempoaxochitl flowers – the colour of which is supposed to guide the dead back to their families – surround photographs of the deceased at their gravesides or on special altars at home. In Mexican cemeteries, children are allowed to play among the tombs, while the adults decorate the graves with candles and flowers. Some people even take food with them, to prepare a graveside meal during their vigil. Others make trails of flower petals leading to the doors of their houses, to show the spirits their way home. In other regions, however, people use a purple flower called “Pata de león” to decorate the graves.
.
All these customs are deeply rooted in the Pre-Hispanic belief that the spirits of the dead went neither to paradise nor to hell, but often wandered for years before finally crossing over into the Land of the Dead (Mictlan, in Nahua tradition). Once a year, on the Day of the Dead, they would return to visit the earth for just one short night.
.
There are different practices in different regions, always related to the local traditions inherited from each of the country’s 62 major Indian groups. In southern Mexico, for example, people burn copal (incense) over the altars to the dead, and in some communities, people even light fires in the doorways of their houses to guide the spirits home! Some take guitars to the cemetery and serenade the dead with their favourite songs all night long.
.
A further example: among the Chamula Indians, in Chiapas, there is a solemn ritual which involves the sweeping of all the roads and cleaning of the fresh water springs, in order to guarantee the dead a pleasant journey home.
.
Text written by Homero Adame and translated by Pat Grounds. Originally published in Activate! 3. By Pat Grounds, Homero Adame, and Carol Lethaby. Ediciones Castillo, S.A. de C.V. Monterrey, México. 2003. P. 52.
.
Would you like to read more about Mexican traditions? Follow this link:

If you wish to read Mexican folk stories? Follow this other link: