Myths and legends from Tamaulipas: The Deer

THE DEER
.
(Folk story from San Carlos Mountains, in Tamaulipas)
.
One afternoon, Emily and I went off horseback riding near the ranch while Don Evaristo was dealing with some other visitors. Suddenly, without warning, we were surprised by a magnificent deer, standing right in the middle of the path in front of us! We stopped in our tracks, and he didn’t move a muscle! Slowly and deliberately, we moved our horses closer and closer to the deer, but apparently neither the horses nor the deer felt at all nervous. Our animals were almost touching noses with the deer, when it finally reacted, and trotted off into the bushes. Emily even managed to get some photos!
.
Later that evening, during supper, we told don Evaristo about our encounter with such a magnificent animal. He was all ears. At the end of our tale, doña Almanda said: “I bet it was El Viejo.”
.
“El Viejo? Who’s that?” we asked.
.
“Oh, it’s a very old deer that’s been around for many years. We see him from time to time, and he’s never afraid of anyone.” She answered. “Evaristo, tell them the story about the magical deer. Remember?” She suggested to her husband.
.
“Yes, of course. It’s a very nice story, and we always like to make a connection between this tale and our dear viejo, here on the ranch! You will remember that in universal mythology the deer is an extremely beneficent animal, by all accounts.
.
“Now, in the woods and mountains all over Mexico and Central America, you can hear similar stories about a poor hunter who makes the spirit of the woods angry, because he has shot and wounded too many animals. 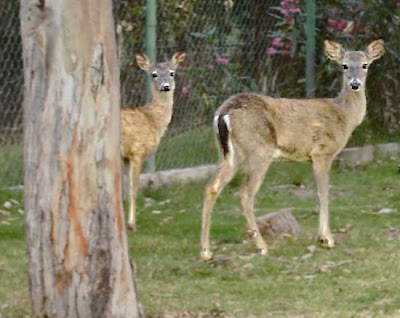 Of course, the story varies, according to the area or the type of landscape, and in many cases the spirit locks the hunter in a cave and won’t let him out until he has cured all the poor animals. I’ve heard this story in the mountains of Puebla and Oaxaca, but this version comes from the Sierra de San Carlos, in the state of Tamaulipas.” Don Evaristo explained.
.
“Not so many moons ago, there was a young man who used to go hunting every single afternoon. There was never a day when he didn’t return home with a rabbit, an ocelot, a coyote, a boar or something that used to run on four legs in the forest. He would shoot any animal that crossed his path in the woods. Much more than he could ever eat. But his favorite game of all was the deer. He was a good hunter, but, one day, the hunter himself became the prey!
.
“This is what happened: one afternoon, the weather was too bad to go out hunting. Early the next morning, however, he took his rifle and set off for the mountains, where he found a trail that led him deep into a canyon. He crossed the river several times. Always alert -- like the good hunter he was --, he suddenly heard something moving close at hand, and then he saw it. It was the biggest deer he had ever seen in his life!
.
“Very quietly and carefully he lifted his rifle and... bang! He shot at the deer. But the deer did not fall to the ground. By no means! Instead, it walked a few paces towards the hunter! The hunter shot again! And again! And he knew for sure he had hit the animal three times! But that brave deer just moved slowly but surely, closer and closer to the hunter! When the deer and the hunter were only about one meter apart, the animal jumped up, leaped over the hunter’s head and disappeared into thin air! The hunter was so scared that he gave up hunting that very moment and never shot another animal again. He realized in a flash that the guardian spirit of the mountains was warning him to stop hunting animals, or face the consequences.”
.
“What a beautiful story,” Emily said. “And I agree with the moral: the hunter became greedy, and killed many more animals than he needed for food. When his hunting became an obsession, it became a vice, instead of a natural means of subsistence!”
.
“Why do you say that the deer we saw, el viejo, is related to the story?” I asked don Evaristo.
.
“Well, it’s just that we have never ever seen such an old deer anywhere else! And there are so many hunters around. But not one of those hunters has ever managed to shoot our dear viejo. But we’re sure he can sense when people are just out in the woods in search of natural beauty and peace of mind, like you two, this afternoon. He has come up to us too, so many times...
.
Written by Homero Adame and translated by Pat Grounds. Originally published in the English textbook Orbit 3. By Homero Adame, Pat Grounds and Carol Lethaby. Ediciones Castillo, S.A. de C.V. Monterrey, Mexico. 2000. Pp. 192-193.
.
You can find more Mexican folk stories on any of these links: