Mexican myths and legends from Oaxaca: A pirate treasure in Puerto Escondido

THE ORIGIN OF THE NAME OF THE PORT AND A GREAT TREASURE
.
Legend of Puerto Escondido, Oaxaca
.
How shall I say it... here it seems that there are two versions of the name of the port, both versions are matters of history. Here's the first: it happens that many years ago, when the Spanish already had a lot of trade with their ships along the coast from Manzanillo and Acapulco to Peru, the pirates who attacked the Spanish galleons had to flee and hide somewhere when the Spanish Armada chased them. It was common that the pirated always had a bit of advantage, so they used to get and hide here because it was a very hidden. And so it was the name of the area then and is the name of the port still today. The funny thing is that in the old days people said it was a ghost pirate ship, but the truth is that the pirates always came here to hide. Legend translated by Homero Adame.

.
And here it goes the other version, which as you will see is related to the pirates as well. According to this version, once an English pirate ship managed to catch a Spanish galleon coming of China and they got a great treasure. The Spanish navy gave chase and caught the pirates somewhere near the isthmus, but the ship no longer carried the treasure the pirates had stolen from the galleon. They took the pirate captain and his people and tortured them till death so they’d say where they had hidden the treasure. One of them, when was just about to die, said: “It’s in the hidden harbor; it’s in the hidden harbor” (“Está en el Puerto Escondido”). That pirate died and the Spanish did not know which hidden port of harbor he had been talking about.
.
And that’s the story. And we also know that no one has ever found the treasure – and people have tried, oh yes they have searched enough everywhere. We think that if the story is true, the pirates must have either buried or hidden the treasure in a cave, but which cave, where? Legend found in Homero Adame's blog.
.
. 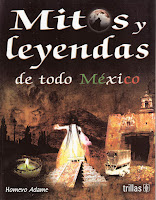 
You can read more Mexican folk stories and legends on this link: Myths, legends and traditions of Mexico