Myths and legends from the Altiplano potosino: The ahuichote

THE AHUICHOTE
(Folk story from Las Carboneras, Matehuala, S.L.P.)
.
A long time ago, I was doing some work in the highlands, in the Altiplano Potosino, and of course I took great interest in the local myths and legends. Every evening I spent time talking to the local people and hearing their stories.

It was very surprising to learn about an ahuichote ― a sort of animal spirit that announces death. In the Aztec folklore there's a mythological animal called "ahuizotl", but its description and its purpose has nothing to do with the ahuichote (also referred as “ahuizote”, “agüichote “or “güichote”) I found in the Altiplano. In the end I concluded that this spirit was "new" to universal mythology, and should be included.
.
Anyway, I heard different stories of this ahuichote, and all of them spoke of how such spirit was the messenger of Death. One night, while drinking hot chocolate by the fire place, and old lady told me: “Years ago, for several days we heard a strange howl and we knew something bad was going to happen. A couple of days later we learned that Chencho died in Monterrey. 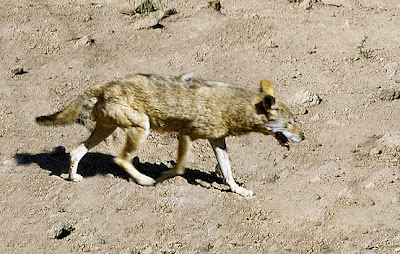 His corpse arrived at midnight and we all went to his poor house to veil him. All the time we were veiling Chencho, we kept hearing a strange noise. It was like a cry of a coyote, but not quite the same. It was an inhuman howl; not from this world. We could hear it, and we all knew what it was. Yes, it was the howl of the ahuichote itself, because he was saying that there was a dead person in the village. And that dead person was Chencho, who was from this village but living in Monterrey. The ahuichote cried all night. Folk-story written by Homero Adame.
.
“Next morning, after the service offered by a priest from Matehuala, we all went to the cemetery for Chencho's funeral. And the frightening howl of the ahuichote was harder and sadder than ever. When the grave was covered with soil, the howling stopped. We didn’t hear the ahuichote again that day, and not for many days. In conclusion, here we all know that when the ahuichote howls, that means that somebody is going to die”. Folk story published by Homero Adame in his blog at: http://mitosyleyendasdemexico.blogspot.com/
.
You can find more Mexican folk stories at Mitos y leyendas de Homero Adame.
.