Celebrating the Dead in other parts of the world

CELEBRATING THE DEAD IN MEXICO
and in other parts of the world
.
We arrived at don Evaristo’s ranch on October 27th. We wanted to get back home for Halloween, because some friends of ours were planning a typically American Halloween party for 31st October. When we arrived at the ranch, doña Almanda was quite busy working on what she called “El altar de muertos.”
. 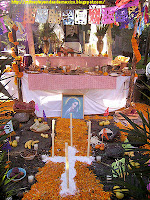 “What’s that for?” we asked her.
.
“Ah, it’s our way of celebrating our dead relations,” she said. “We make an ‘altar’ for them every year.”
In the United States, we all celebrate Halloween, because of our Anglo-Saxon background, but most Americans don’t really know about its ancient, pre-Christian origins, in both Europe and the Americas.
That evening, after another great dinner, we sat in the living room by the fire while doña Almanda made hot, sweet cinnamon tea. It was then that don Evaristo started to tell us about the Día de Muertos in different parts of Mexico. He even showed us photos from every state he mentioned.
.
“And are there any folk tales or legends specially related to the Day of the Dead?” asked Emily.
.
“Well, there must be some, but I’ve never heard any.” Don Evaristo answered. “In this case, I think the traditions themselves are just as interesting as any tales. For example,” he continued, “ancient cultures like India and China also have ceremonies like ours in essence, though the rituals may be different. Indeed, many cultures have a fixed date to honor the dead. The main reason for these ceremonies is really to keep the ghosts of the dead from troubling the living, and, of course, to show affection for the departed.
.
“In India, among the Hindu, the Ñr~ddhas, or ‘rituals for the ancestors’ last for ten days. On each day, people give the spirits food to give them strength to free themselves from each of the ten hells they must pass through, on their way to eternity. On the first day of the new autumn moon, the head of each Hindu family performs ceremonies for the dead of the last three generations. Additional ceremonies are performed on the day of dead.
.
“As I said, this special day exists in many countries. There are general ceremonies for the souls of all the dead, such as All Souls’ Eve in Christian countries, or the Feast of the Hungry Ghost, in China. And also there are more specific ceremonies, dedicated exclusively to immediate ancestors, heroes, etc. In this category, you have Memorial Day, in the United States, for example, in which those who died in battle, or who died at sea, or even who died in great disasters are honored.”
. 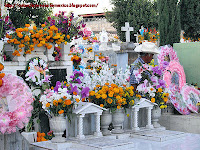 Don Evaristo’s explanation gave us some idea of how important this day is all over the world, and how certain beliefs may be universal. For the first time, I really understood the true meaning of our Memorial Day. We didn’t go back home for the Halloween party with our friends. We decided to stay on with don Evaristo and doña Almanda and learn more about the folklore of the Day of the Dead in a Mexican cemetery instead.
.
It was awesome! Such color, such beauty, such joy, such life! And all in honor of the dead! This is something every foreigner to Mexico should experience!
.
- - - - - -
Written by Homero Adame and translated by Pat Grounds. Originally published in the English textbook Orbit 3. By Homero Adame, Pat Grounds and Carol Lethaby. Ediciones Castillo, S.A. de C.V. Monterrey, Mexico. 2000. Pp. 54-55.

Very good mate. Mexican traditions are lovely and I have enjoyed your text immensely!