Myths and legends from the State of Hidalgo: The Turkey

.
THE TURKEY
(Folk story from Alfajayucan, State of Hidalgo)
.
Don Evaristo’s apparently endless repertoire of stories from all over Mexico never ceases to surprise us! In a single evening he can choose any topic, such as animals, saints, or witches, or whatever, and then go on to tell us stories about that topic, from numerous different states, for hours!
.
The other night, for example, Don Evaristo started telling us some terrifying stories about sorcery, witches and wizards. For some reason, my pocket cassette recorder, which usually records everything, didn’t record a single thing that night! Maybe it was afraid too! However, I do recall one particular story, from a place called Alfajayucan, in the State of Hidalgo. And this is more or less the way that Don Evaristo told it:
.
“Now, we all know that there are many animals of the night, which some people believe really to be witches or sorcerers, who know how to take on the shape of an animal. 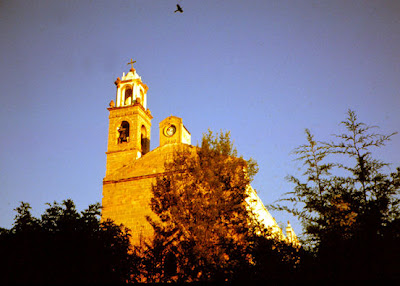 This practice is called ‘nagualism’, and it is a fairly common motif in Mexican mythology.”
.
“Yes. There are similar beliefs among some of our American Indian tribes, too.” I said.
.
“Of course there are!” Don Evaristo replied. “Don’t forget that most elements of mythology are universal. That’s why stories with similar content are told all over the world in different cultures. Anyway, the typical animals occurring in ‘nagualism’ are coyotes, crows, and owls.” He continued.” In Mexican mythology, there’s also the turkey – the ‘guajolote’, as we call it here. In many parts of the country, you can hear tales of ‘guajolotes’ who are really men or women who practice the art of ‘nagualism’.”
.
“Can you give us an example, please?” Emily asked.
.
“Well… there’s one place in the State of Hidalgo, Alfajayucan, where many people say they have seen a huge, strange light in the dark. For example, they may be just walking across a field at night, when suddenly this enormous light shines out from nowhere. And, according to some beliefs, those lights are used to disorient the person, who immediately feels lost, even if he knows the path perfectly well. As a result of his confusion, he gets really lost and can often walk all night without finding his way home. However, there is a magical way to break the spell.
.
The person has to embrace a tree and stay there with his eyes closed for as long as he can. The light turns into a ‘guajolote’ and starts to hit its victim really hard with its wings. Shortly after this, the ‘bird’ will go away and the person will finally find his way home.”
.
“What happens if that person opens his eyes and sees the turkey?” I asked.
.
“Well, according to some legends, if he sees the ‘guajolote’, he will also see the real face of the sorcerer or witch, but the sad thing is, he will not live long enough to tell anyone about it!”
.
“Is that true?” Emily asked.
.
“That I cannot say.” Don Evaristo replied. “But legends are legends, and many people say they know of people who were found dead, embracing a tree, their bodies bruised by some inexplicable blows – the blows of the ‘guajolote’s’ wings, perhaps?”
.
Written by Homero Adame and translated by Pat Grounds. Originally published in Activate! 2, by Carol Lethaby, Homero Adame and Pat Grounds. Ediciones Castillo, S.A. de C.V. Monterrey, Mexico. 2003. P. 134.


.
.
If you wish to read more Mexican folk-stories, visit this other blog:
.
.

Hello Homero!!! I rilly love your leyends in english too!!! I red some in the other blog you hav and they are great. This one is exelent. the naguales that become guajolotes. wow!!!